DOES IT MATTER WHAT WE CALL GOD?

THE NAME OF GOD DO WE NEED TO GET IT RIGHT?

by – Mary A. LaClair 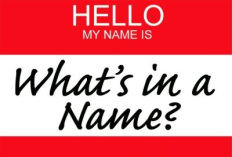 Let the name of God not be profaned or adulterated as salt which loses it flavor by mixing with  other things.

Leaders in the PCUSA church had better get it right and stop setting a bad example.

Local pastors under leadership of churches of this kind, if they don’t want to scatter and lose their flock, should seriously consider going independent. Better to please God rather than man.

Over the years people have told me they think as long as their intent is to talk to the Creator, that God honors their intent and it doesn’t matter what we call Him.

As long as the image is right in their own minds, “What does it matter?”, they ask.

How would you react if you were the one being addressed? Would you care, indeed would you even answer, if you were called by someone else’s name? You would, in effect, not even listen because it would not get your attention.

Yet, in spite of this, some people think it is merely their own personal belief that counts.

Thus, they are actually putting more faith in their own thoughts…. than they are putting faith in God’s thoughts. And this is being done in some churches! Well, God understands, they may continue… trying to get God to think the way they think instead of the other way around.   Wait, isn’t that manipulating God…?

Apparently the PCUSA does not know who their God is. But we should know.

And God said, “Let there be light,” and there was light

And God said, “Let there be an expanse between the waters to separate water from water.”

And God said, “Let the water under the sky be gathered to one place, and let dry ground appear.”

And God said, “Let there be lights in the expanse of the sky

And God said, “Let the water teem with living creatures,

And God said, “Let the land produce living creatures according to their kinds: livestock, creatures that move along the ground, and wild animals, each according to its kind.

Then God said, “Let us make man in our image, in our likeness,

John 1:14    The Word became flesh and made his dwelling among us. We have seen his glory, the glory of the One and Only, who came from the Father, full of grace and truth. NIV

When God speaks to the churches, here is something He saya:

Matt 5:13   “You are the salt of the earth. But if the salt loses its saltiness, how can it be made salty again? It is no longer good for anything, except to be thrown out and trampled by men.”   NIV

Some churches are committing spiritual adultery by trying to mix two opposing religions together. They each think they will convince the other. But who knows who will convince whom. And what does God say about salt which loses it flavor? Note well, it is the churches which He compares to salt losing its saltiness.

Sounds like dire consequences. We should consider what God cares about how He is addressed. It is possible to be sincere yet be mistaken and God does not take that lightly. We should know Him, not pretend we know Him.

Here is a quote from Rev. Billy Graham:

“As a matter of fact, God takes His name very seriously, and the Ten Commandments include the command that we must not take the name of the Lord in vain. We are to use the names God has given for Himself, and we are to recognize that God takes His name seriously because He desires to be rightly known by His human creatures. We cannot truly know Him if we do not even know His name.”

A computer search was done in the NIV for “my Name” (case sensitive) and it resulted in the following list:

In these Scriptures God talks about how He feels about His Name. Some of these are quite interesting, some revelatory, and some even surprising, to say the least.

To save you the time and effort of looking up each of these Scriptures, end notes below are a sample of how He reveals what His Name means to Him; and the benefits we may receive by honoring Him by His correct Name….the Name He prefers and the Name and titles which will get His attention.

Additionally, there are some very beautiful sites on the names of God in the links below.

Names, plural? Well if you are a Mom or a Dad, you have several names to which you reply: Honey (hopefully), Dad, Grampa, Mom, Grandma, Aunt, Uncle, but if you call out Grandma and expect to get Dad’s attention…. you get the idea, some names are titles.

Heb 1:1-3   In the past God spoke to our forefathers through the prophets at many times and in various ways,  but in these last days he has spoken to us by his Son, whom he appointed heir of all things, and through whom he made the universe.  NIV

The universe made through the Son. The SON is the Creator. The Son is Jesus — NOT Allah. Refer back to John 1:1

Here the Son is called GOD   Allah has no Son. Allah is not God.

The everlasting God, the Lord ,

The Creator of the ends of the earth, NKJV

Here we see that The Lord is God the Creator –

Rom 10:9-10  That if you confess with your mouth, “Jesus is Lord,” and believe in your heart that God raised him from the dead, you will be saved.  NIV

Jesus Christ is Lord – He is the Creator NOT Allah

“…In all thy ways acknowledge Him and He shall direct thy paths…” Prov 3:5-6 – acknowledge allah? How foolish! Allah is NOT the God of the Bible, he is the god of the Koran.

Let the name of God not be profaned or adulterated as salt which loses it flavor by mixing with other things.

Again, Local pastors under leadership of churches of this kind, if they don’t want to scatter and lose their flock, should seriously consider going independent. Better to please God rather than man.

On the other hand, the outgrowth of evangelical churches taking their places is encouraging.