A MAN SHOULD KNOW A WOMAN’S PLACE IN GOD

— by Mary A. LaClair

Concerning a column titled “A Woman Should Know Her Place'(in God), (under the Helium Website category: Should Wives Still Submit To Their Husbands)http://www.helium.com/items/1094700-womans-place—in-society-in-church I have had some input. Some did not understand what lesson they were to get from the reference to Bible passages in chapter 13 of the Book of Judges.

This is the chapter which deals with Samson’s mother and foretells the birth of Samson. God brought the message to the woman. Manoah’s wife was out tending the garden

when the Angel of God appeared to her. She took the message from God to her husband. The husband, not wanting to believe a woman, even his wife, prayed that the Angel would come again, this time to both of them. God came again, but came to only the woman again, when the man was not there.

If there is there a message here it is ‘why do you doubt your wife?’

Feeling the husband would need to see for himself, the wife fetched him while the Lord graciously waited. When the man asked further instructions of the Angel, the Angel replied, (my paraphrase) just do what I told your wife!’ However several versions say “Be sure she follows all the instructions I gave to her”.

Wow! Did that man feel put out! Now, it was he who was under orders to follow his

If a preacher today preached this message he’d probably be thrown out of a lot of churches; yet, this message of mutual submission is from God, and God never changes. Mutual submission and mutual respect are all over the New Testament; this message even being in the book of Judges in the Old Testament. Lest some think women were messengers concerning only the birth of a child, remember the risen Jesus appeared first to Mary Magdelene with the instructions, “Go tell the brothers that I have risen!”

One person thought the earlier column should be named Man Should Know Woman’s Place With God. I agree!

There is a lesson to be learned there. No more of this business that a wife is wrong because of Eve. Lessons on Adam and Eve would cover five pages but before I get off

on a rabbit trail, Adam could be faulted for not telling Eve of God’s message properly, for in Gen 2:15-21 it is only Adam who is given the command not to eat of the tree, and Eve wasn’t created until after this. Is it any wonder God decided to trust women with more messages? Many women prophets and even a woman Judge are exemplified in the Old Testament. Let today’s women not follow Adam’s inadequate message delivering concerning God’s commands!

Returning to the story of Samson’s mother – If Manoah had been working alongside his wife he probably would have been there. Yes, I’d say the Lord likes togetherness and

Further interesting reading regarding this topic may be found at: http://looklistenthink.wordpress.com/2011/01/30/boss-or-leader/  and

If a man dares hold submission over a woman’s head, then it is both the man and the woman who should know woman’s place with God, and with the position of women in Christian culture. Further, it is my personal opinion that God will use women mightily in these last days! Selah! 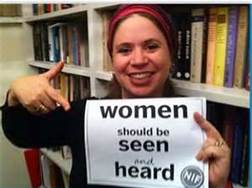 For further reading relating to this topic you may wish to see: